An update about Journey 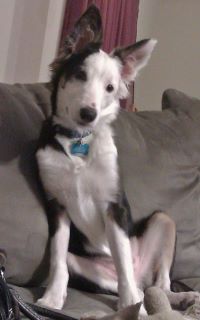 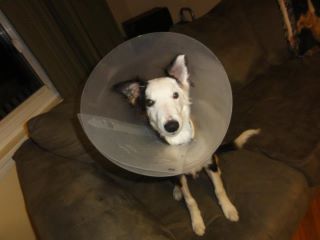 On August 7th, 2011, a benefit was held at Houndstown. Houndstown offered their facilities for a day of dog washing, raffles, silent auctions and a bake sale. Between the proceeds gained from the dog wash, $478 was raised for Journey’s benefit. Along with the funds raised through paypal donations by numerous individuals, we were able to raise a total of $1,077. Dr. Cecelia Marshall of Veterinary Specialty Services agreed to go ahead and do the surgery at cost with that amount and allowed a payment arrangement for the remainder of the funds. Journey went in on August 15th, 2011 and underwent a successful surgery to fix his Pactus Ductus Arteriosis. In the weeks that followed, Journey showed improvement every day; his energy level increased, his appetite picked up and within 2 weeks, he gained 5 pounds. At his 2 week checkup, Dr. Marshall confirmed that his heart size had already decreased by half! Journey is now able to run as much as he wants without coughing or becoming lethargic within minutes.
Journey’s benefit is a great example of people coming forth to aid an animal in need. Without the help of many individuals, Journey would not be here today. The following are all individuals assisting in Journey’s journey to a better, healthier life. 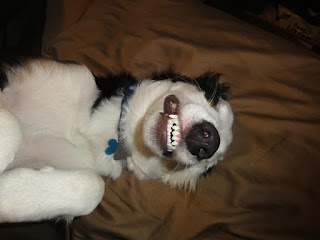 I apologize if I have missed any names or organizations. So many individuals and organizations came to Journey’s aid that it would be impossible to come up with each and every one of them. Journey is still finishing up the last of his heart medications and looking healthier every day. According to the veterinarian, the only lasting effects will have to be that anytime Journey has a surgery or gets a cut or scratch he has to do a round of antibiotics due the implant in his heart.

Email ThisBlogThis!Share to TwitterShare to FacebookShare to Pinterest
Labels: Rescue

This was taken from Kelsey's facebook page. There is a link to a donation website any help would be appreciated.

Journey is a 5 month old border collie who was bought from a local breeder and then returned due to a heart defect. The breeder was unable/unwilling to treat him so I went and picked him up. The next few months will be a critical time for Journey as I need to raise money and get him treated. His surgery was estimated to be between $2200 and $2400. Any donations or advice anyone can offer Journey will be very much appreciated. We are also planning a car wash benefit in the next few months complete with raffles and entertainment. Without this surgery, Journey will not live very long. With his gentle and loving temperament, Journey has a future of being a possible therapy dog... My goal for him will be to give back to the community that will ultimately save his life.

Vet Visit on July 21st, 2011- Today the vet started of with a good prognosis. He listened to the murmur and said it was consistent with PDA (Patent ductus arteriosis) with the sound of the murmur and the place that he heard the problems. After learning about the situation he went ahead and did a count on his oxygen level which gave him a reading between 81-90% (he said is was a little low). He then went ahead and did x-rays and said sometimes they will show the factors of PDA. He came back with news I was not expecting. Journey's heart is already enlarged and has edema (fluid) in his lungs. He said that Journey has a good chance if the surgery is done quickly. The x-rays did show factors of PDA as well. He put Journey on Lasix to help keep the fluid from developing in his lungs. 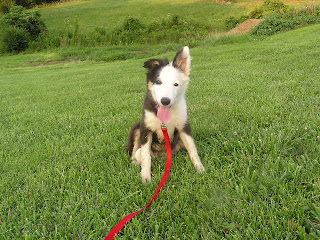 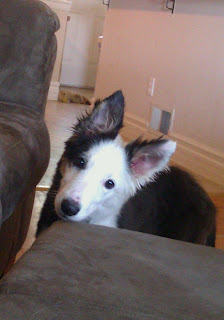 Here is the link for the donation page. Let's help this special little dog. 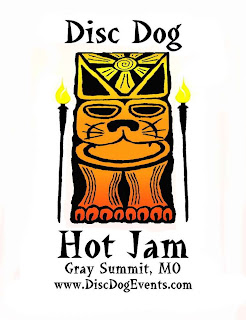 One week until the hottest Disc Dog event in Missouri. The 3rd annual Disc Dog Hot Jam. This is a QUADRUPED event and will host events such as Ashley Whippet Invitational World Championship Qualifier, Beginner Freestyle, Throw and Catch & even a Diving Dog Competition. According to the organizer Adrian Custer there will be "A whole bunch of people ... from all over the US and some from Canada."
So get your dogs ready, get your discs ready cuz there's gonna be a Hot Jam next week!

Email ThisBlogThis!Share to TwitterShare to FacebookShare to Pinterest
Labels: Event

This years Spring Friendly went on in spite of impending weather! The Friendly was held at Fenton City Park. It was a beautiful day and the competition was fierce and fun. If you would like to see the complete breakdown of the results click here. Otherwise here are the winners:

And here are additional pictures from the event from our KCDD neighbors. Congrats to everyone & SEE YOU IN JULY!

Email ThisBlogThis!Share to TwitterShare to FacebookShare to Pinterest
Labels: Event

Just a FRIENDLY reminder that the 2nd annual Spring Friendly will be taking place on May 7th. Check out this sweet poster that Adrian Custer whipped up for the occasion. 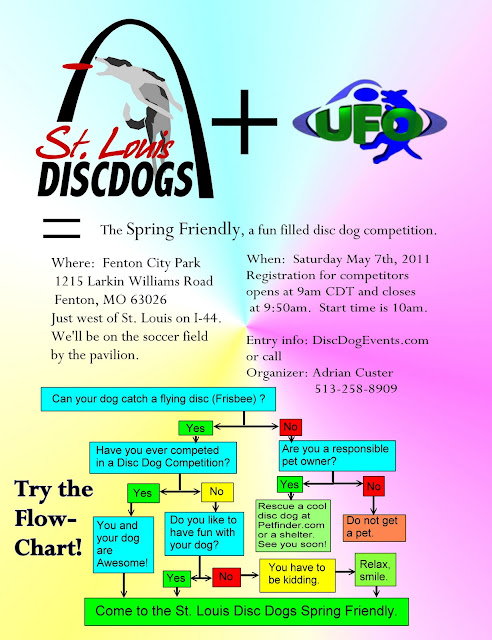 Print these and hand them out to EVERYONE. Spread the word & see you all there!
Posted by St Louis Disc Dogs at 9:16 PM 1 comment:

These are some of the pictures from the 2011 Mardi Gras Pet Parade. A beautiful day to let the dogs stretch their legs & work out some of that winter rust. If you'd like to see even more pics go to our facebook page.

Email ThisBlogThis!Share to TwitterShare to FacebookShare to Pinterest
Labels: Demo

We are extremely excited to show our newly revamped website. This will be more of a blog style website in which we will post about the goings on of the club. Also we will have useful/helpful links to help make you a better handler and allowing your dog shine. Please feel free to comment on design & things you'd like to see.